Posted by Darlene on Friday, 14 October 2011 in Blog - GoalFriends

The Domino Effect Part Two: 7 Steps to Putting my Goals into Action

The Domino Effect Part Two: 7 Steps to Putting my Goals into Action

I tend to be an obsessive list maker anyway, so the first time I wrote down my goals it was on three pages of yellow legal pad paper. I had them all neatly compartmentalized by topics:

At first, my overzealous list of goals seemed like a long wish list with little check boxes beside them, but then I taped the three pages to my bathroom mirror and something magical began to happen. Each time I brushed my teeth and put on my make-up there was that long list of things I wanted to accomplish. With every brush stroke I was forced to ponder how was I going to make it happen, and that’s when I realized that every goal matters. Writing my goals was just the first step to defining what I wanted. I soon realized that in order to reach my goals the following actions needed to happen.

7 STEPS to Putting Goals into Action:

Don’t just write down what you want, put your goals into affirmative statements. For example, “I will go to the gym three days a week,” “I will save 10% of my salary,” “I am going to go on a safari in Africa this year.” “I will find a job in Africa where I can contribute what I do best.” I can and I will.

You actually need to see yourself meeting your goal. I visualized going to the gym working out on the elliptical machine and seeing the display ticking off miles and minutes. I saw myself with a firm and healthy physique. I saw the investments on my financial statements growing. I saw myself riding along the African savannah in open top Land Cruiser photographing lions. See yourself getting what you want in life. 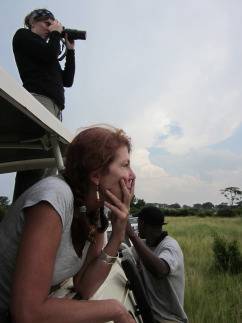 The act of visualization allows you to own your goal, and owning it means you begin to attract the energy and belief that it is possible. This is what is called self-efficacy and what books like The Secret and The Law of Attraction explain so well. People who have a difficult time meeting their goals are often plagued with negative self-talk that prevents them from getting what they want. As Richard Bach wrote, “Argue for your limitations and sure enough they are yours.” Believing in yourself and your potential to make what you want happen, is half the battle to making your life a masterpiece.

The next step is to figure out how and by when you are going to make your goals happen. This requires you to be specific and realistic about your goals, and in many cases it takes doing some research. It also requires you to share your goals with others. I am always amazed by the support and the wealth of information I get when I tell my friends and colleagues what I want to accomplish. Before I know it, they are sending me web links, titles of books, or sharing their personal experiences on the topic. People who care about you want to see you succeed.

5. BE TENACIOUS and DON’T GET DISCOURAGED.

Sometimes it takes a few years to reach your goal. If life throws you a hard ball, catch it, and throw it back! For example, I have had the goal of selling my house on my goal list since 2009. You remember that year don’t you? That’s when the global economic meltdown began and the real estate market collapsed in the US. Despite that, I still wrote it down on my goals for 2010 and 2011. When I met with my realtor this year, she gave me several reasons why it would be difficult to sell my house, too many houses on the market in the neighborhood, the house was not as new as others, and so on. I told her that I knew it would sell and that I trusted her to make it happen. 19 days later, we had an offer and within two months, it was sold! Be persistent and stay positive.

Whenever you accomplish a goal, take satisfaction in letting others know and cross it off your list. Every time I cross another thing on my list, I say to myself, WOW if I managed to get that done, imagine what else I can do. Success has a cumulative effect. I look back at all my goal lists and I am surprised at how many goals I have managed to cross off my list. Some are minor goals like, “begin to write a blog” but some are major. I would like to share with you my proudest accomplishments in hopes that you too will believe that everything is truly possible if you put your mind to it!

This is what I mean by the Domino Effect and what I will explore more in The Domino Effect Part 3. In 2003, I wrote on my goal list, “Do a long –distance bike ride.” Never having done this, I set out to buy myself a quality road bike and began training. That year (and again in 2004), I rode 187 miles from Raleigh to Wilmington, North Carolina and raised over $3000 for the American Diabetes Association Tour de Cure.

In 2006, I met a wonderful woman and now great friend, Wenny. An avid cyclist, Wenny encouraged me to ride 100 miles (in one day) with her in the Carolina AIDS ride. So at the ripe age of 50, I completed a century ride in 7.4 hours!

Two years later, I was on a 7-day bike tour through the Irish countryside with my two daughters.

On my goal list for the last nine years was to make sure I got my two daughters through college. That required saving money and giving up some things but it was so worth it. In 2009, my oldest daughter graduated with highest honors from Rochester Institute of Technology and in 2011, my youngest graduated from Syracuse University. Saving enough money to pay for their education and giving them support in the process is perhaps one of my proudest accomplishments.

One of my goals for this year was to go Mountain Gorilla trekking. The only Mountain Gorillas in existence live in the volcanoes and surrounding mountains on the borders of Uganda, Rwanda and the Democratic Republic of Congo. Despite an expensive and grueling 6.5 hour hike in the pouring rain, I was rewarded by an hour of peaceful observation of about 20 gorillas in a bamboo rain forest. The Susa family group in Volcanoes National Park, Rwanda.